This November I had made another trip to Kuala Lumpur. It was basically a family trip and I had thought that it would be cool to try out the famous coffee outlets there. As I was staying at KL Suites at KL Plaza, I had a choice of Coffee Bean and Starbucks to have my coffee. As Coffee Bean gave a better view of KL I chose it. I was later joined by my brother and some of the rumahpanjai.com forum members. It was a normal get together and we talked about various subjects ranging from tattoos to international issues. Although I would like to talk about how expensive the coffee there was - a cup of normal black coffee costs RM7 per cuppa, I did not want to spoil anyone's appetite. I told myself that due to globalisation, one can actually make profit out of coffee. Somewhere in the World Trade Organization (WTO) Meetings some people would start riots because of coffee prices. Overall, the Coffee Bean KL Plaza was a pretty cool place to chat - no loud music bursting your eardrums. It reminds me of the old folks I used to know back home in Sarawak. They spend a lot of their time in the Kopi Tiams (Coffee Shops) discussing global issues (Nuclear arms), analyzing presidential decisions (about Weapons of Mass Destructions) and managing top notch football teams (topic on why Manchester United or Chelsea lost). Yes, coffee has that magical effect. Though a lot of health practitioners warn about the potential overdose of caffiene - they must not forget that coffee, if given the chance, may be the answer to World Peace. It could be due to lack of coffee that we hear our noble Parliamentarians and elected representatives debate or quarrel uneccessarily over small issues. They should just serve coffee while the sessions are running. It keeps them awake. One of the factors that could contribute to some of our Members of Parliaments being absent from attending Parliament is that they are sneaking out to catch one of more doses of coffee at Coffee Beans and Starbucks. 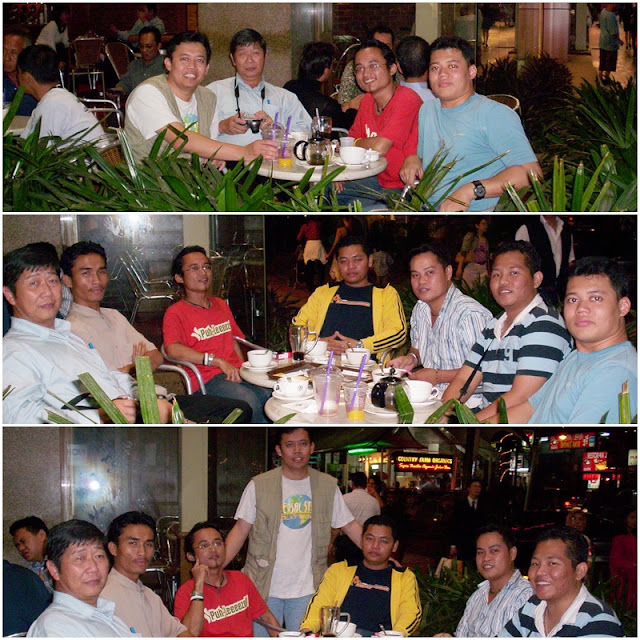 Tuan Lokong said…
I surfed thro' the search machine Yahoo for my name and I landed here. Cheers glad to me a friend in this wide world of Cyber.

Cheers again hope to meet you all again. Mmmm I always meet your brother in KL say every month hehe for that nice Star Bucks Coffee.
7:34 PM