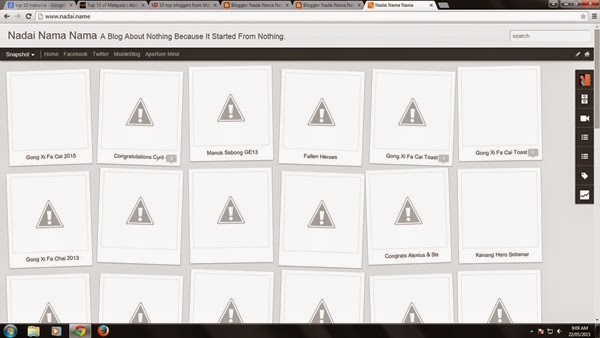 Missing photos in Blogger uploaded storage options
This is a test post for Nadai Nama Nama after more than a few years of quiet consideration on the path that needs to be taken by this once noisy blog. I have to admit that Internet technology has taken over me. Rather than depend on blogger or google's photo storage option I will have to go back to the basics with photo storage for my photos. The various upgrades of my internet server providers and also changes that the Google blogging platform has undergone caused some of my photos in the blogs of a few years to go missing. Its also partly my fault as being too interconnected with some mobile apps I could have deleted the photos via the apps in my smartphone.Though I tried to salvage some of those photos in the posts that date back to several years I do not think I will be able to do that post by post as I do not have the time. Going through the backup photos image by image was not so kind on these tired eyes and mind after office hours.
So while I tinker on with the technicalities of this blog thingy and try to repair what the Internet upgrades and enhancements have done to my Nadai Nama Nama allow me to extend my Merry Christmas wish to all readers. God Bless you all.