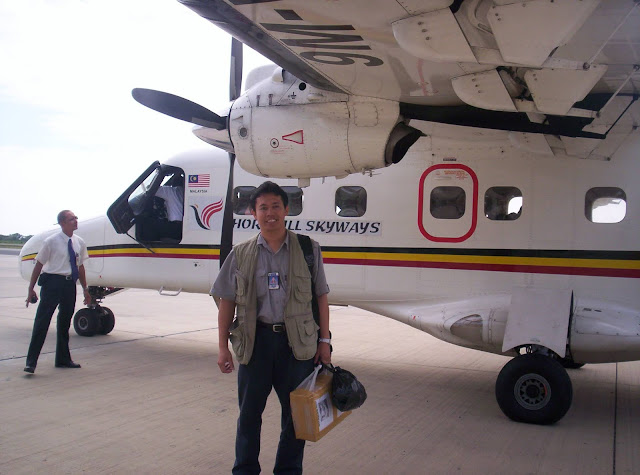 The month of September has been a hectic month. I went to Marudi on a day trip to accompany my Deputy Director who was presenting a paper "The Role of Rivers in Socio-Economic Development: A Highlight on the Batang Baram" in a Seminar on 21 - 22 September 2005. This is in conjuction with the annual Baram Regatta event in Marudi. I was overly anxious about the trip as I have not been to Marudi for quite a while - say about 8 years. 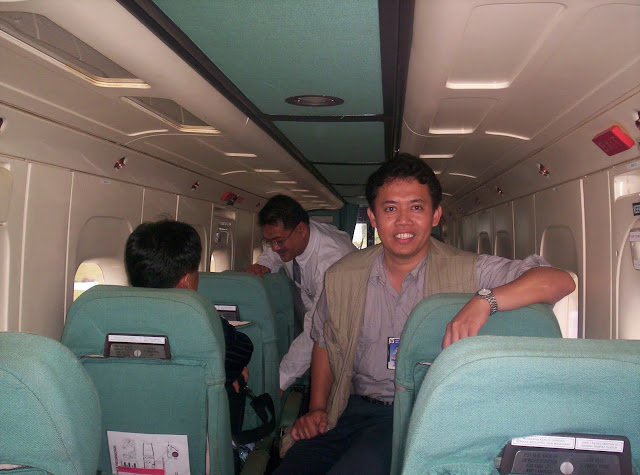 From Kuching International Airport, we landed at Miri International Airport at about 1 pm in the afternoon. From Miri, we managed to hitch a ride with YB Awang Tengah's airplane, a Hornbill Skyway Dornier A20. It was my first time on that type of plane also so naturally I was excited about it too. I thought Hornbill Skyways opereated Helicopters only. Accompanying us for the ride was also YB Hamden and Mr. Chong Ted Tsiung the Natural Resource and Environment Board Sarawak Controller. Here are some views from outside and inside the plane. 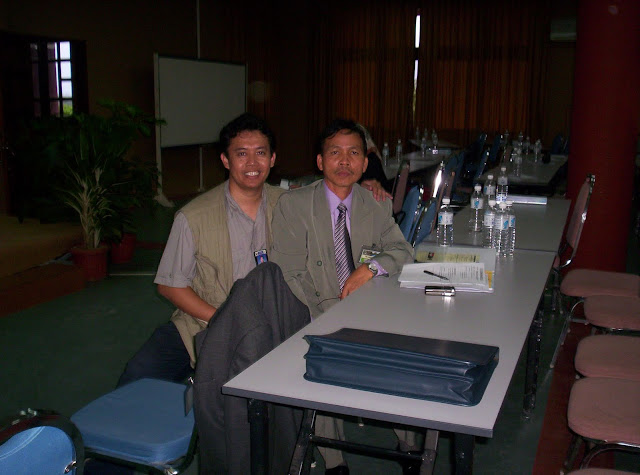 The trip was quite short. We reached Marudi in 10 minutes time. Upon arrival we were met by YB Lihan Jok, Dewan Undangan Negeri Member for the Telang Usan Constituency and the Dewan Undangan Negeri Member for Marudi YB Sylvester Entri. We proceeded to the Dewan Suarah for the official opening and were given a traditional welcome dance by the locals wearing colourful traditional costumes. Speeches followed after that. Apart from the other high ranking government officials like Mr. Ose Murang (Miri Resident), the local community leaders (Penghulus, Pemanchas, students and Heads of Department) within the area also attended the opening ceremony.

I managed to take a walk around Marudi Town during the lunch break. Since I have not been around there, I took the opportunity to see the development that has taken place in Marudi. And I was not disappointed as I could see various government projects that have been implemented and completed. One of them was the children's playground which I believe would put a smile on every kids face. The colourful features and stood out impressively.

They have a park there now for recreational purposes i believe. I must say the park there is quite good and well maintained. Let's hope it stays that way - i have to salute the Marudi District Council for a job well done.

My next stop was the famous Fort Hose which was on high ground. The antique cannons i saw there, I believe were equivalent to the present day Weapons of Mass Destruction.

The Big Cannon guarding the front

Descending on the town from the hill, I found myself in the town area - a mild 15 minutes walk from the Dewan Suarah it seems. Good exercise I say because I was already sweating. The town has certainly improved in may ways. One can see many hotels available so I guess tourists who flock to Marudi will not complain of having no accomodation. I believe the famous hotels include Mulu Hotel and Grand Hotel which I managed to get a snap shot of, and of course the karaokes are available if you have the sudden urge of trying out your vocals, sing a few pop songs to entertain the Marudi folks.

Marudi Town Shoplots from another angle

Queen Square Karaoke - will try it next time

Volcano Pub - How hot can you get?

Another view of Marudi Town

If one is a gambler, you would not expect to find casinos here but the Toto outlet here would give those players known also as 'punters' an opportunity to win a Million Ringgit in its 6/49 Draw every Wednesdays, Saturdays and Sundays. So its not so bad after all.

Toto, Claude Town Music Cafe and Queens Inn - 3 in One?

The river view and river traffic is another sight not to be missed. Since Marudi is mostly accessible via river travel, this mode of transport is still important. But the sight of the great Baram River itself is an interesting enough.

A view of Baram River

If I had any complaint about the town, it would have to be the Marudi Public Library. In trying to promote a reading society aka knowledge society (k-society) I was quite sad to look at the existing library building. The reading rooms were quite warm. The variety of books were also limited. Reading in the library is not that conducive, as if the library is to cater for the school going population only and not the general ordinary people. I do feel that something is lacking here.

The Public Library in Marudi

Finally it was almost time for the Seminar to begin again so I made my way back to the Dewan Suarah. I managed to stop by at the old - i really mean ancient Government Rest House. It was still in tip top condition when I went to take a peek at it. The VIP Room was like a Hotel Suite - but you have to see it to believe it so here are the pictures.

The Verandah at the Rest House

After the seminar it was time to go back. I managed to bid farewell to YB Lihan Jok, my University mate at University Science Malaysia Penang. From the Dewan Suarah we converged at the airport, which was a mere 5 minutes ride. The activity at the airport was hectic due to the presence of so many YBs and VIPs. Loitering around the airport I managed to look back at Marudi Town, exhausted from all those walking about. I can conclude that Marudi is a nice small river town. Its like most of the river towns I have been to but its uniqueness lies in the beautiful scenery and friendly folks of Marudi Town. It has developed tremendously since the last 8 years. I would say the quality of life experienced in terms of 'stress level' due to traffic jams or ailments from polluted air is almost nil. Though the town lacks a proper road to link it to Miri City - the timber roads are currently accessible for 4 wheel drive vehicles, linking Marudi to Miri - at least that's a start. Being a visitor, I would not want this type of environment to be spoilt - I love the town the way it is - small yet compact. As the plane lifted off, the aerial view I took summarises all that is about Marudi - and I am still wondering if they have a Magnum 4 Digit outlet there too since I could not get a picture shot of it.